Imbalance of “hunger hormones” can make weight loss harder. That is because hunger can often defeat your willpower and tempt you to give up on your efforts to lose weight.

We have learned a lot about these hormones in the last decade. Knowing how to manipulate them can be a cornerstone in your weight loss success.

Your body has a hard time fighting hunger.

Researchers have identified tens of hunger hormones in the last decade. But, this article will discuss the top 4 hormonal regulators of your appetite.

We’ll also have a look at what can throw these hormones off balance and what you can do to minimize the risk of that happening.

How these hormones affect appetite

Here are some factors that can throw these hormones off balance. Also let’s see what you can do to counter these triggers.

This is the strongest trigger of all that can throw your hormones off balance. Your diet has a lot of influence on the levels of your hormones. A major reason why ‘crash dieting’ tends not to work is because it throws these hormones out of balance.

In one piece of research, scientists studied the effects of crash dieting on eating patterns and hunger hormones.

Although the participants lost weight, very low calorie dieting reduced their leptin (appetite suppressing) levels by as much as 40%.

Not only had they lost leptin, their bodies also developed increased resistance to leptin. Their ghrelin (appetite stimulating) levels also increased (28).

This means, you are more likely to come back to your old eating patterns and gain weight again after the diet. This is the so-called “yo-yo effect”.

You have to be a bit more meticulous, and patient, when choosing a diet. To make your weight loss plan a success, you need to eat a healthy and well-balanced diet rather than an almost starvation plan.

Research shows that leptin levels fall at both extremes of caloric intake i.e. high calorie diet and very low calorie dieting. The key here is to find the right balance.

Researchers have now started to unfold the mysteries behind sleep. No aspect of your physical or emotional being remains untouched by sleep and your weight is no different.

When it comes to weight, sleep has profound effects on your hunger hormones.

Here is what research says sleep deprivation does to your hormones (29-33).

Here is what you can do:

Stress induced obesity is not a myth.

Stress takes a huge toll on your body and eating patterns take a hit too.

The biggest reason for stress induced overeating is increased cortisol levels. Swedish researchers have found that increase in cortisol increases leptin resistance too (34).

What you could do to reduce stress-related eating: 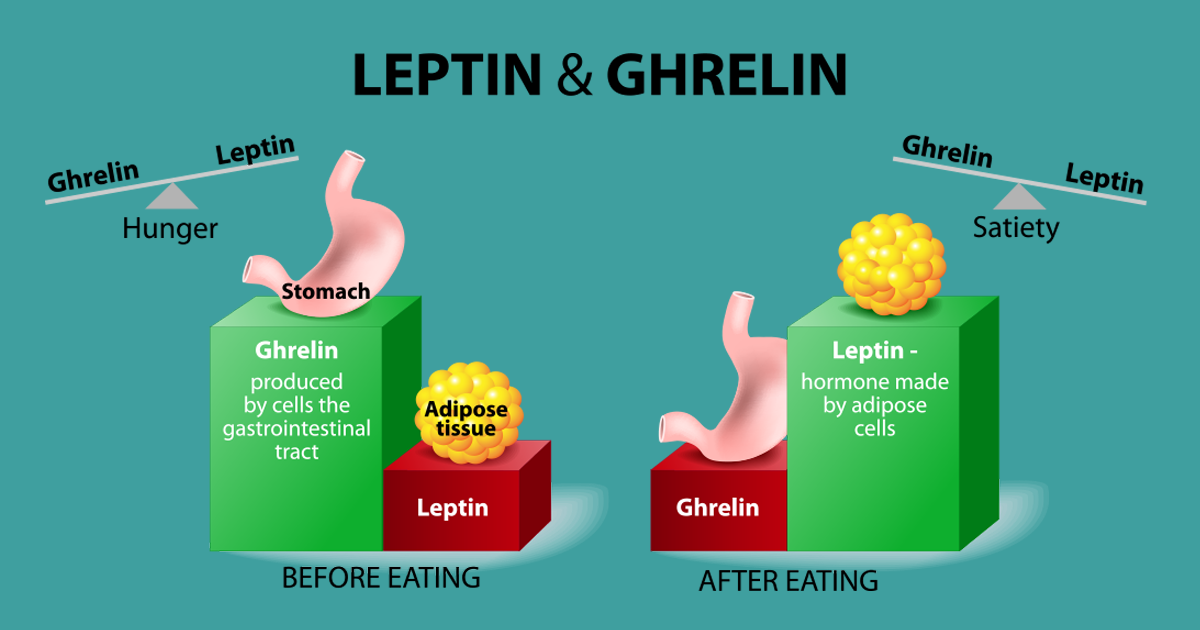 It sends your brain a “stop signal” when you are eating and thereby controls your food intake.

Leptin targets a part in your brain called the hypothalamus. Within your hypothalamus, leptin signals that you have eaten enough and now is the time to stop. It also boosts your metabolism and makes you burn more calories than usual (2-6).

Leptin is a product of your body’s fat cells - adipocytes (7-8).

There is a direct link between the amount of body fat you have and leptin levels. The bigger your fat stores; the higher the levels of leptin in your body (9). Thus if you’re obese, you should feel less hungry.

However, the leptin situation is a little more complex.

In fact, it may become more difficult for people to control food cravings with increasing weight.

Why is that? Aren’t the raging leptin levels supposed to curb your appetite? Well, yes, but you have developed a condition called “leptin resistance”.

No matter how much leptin your body produces, it is an absolute waste if your body cannot put it to a good use. That is the general idea behind leptin resistance.

When you become resistant to leptin, your brain stops responding to even to the highest of leptin levels (10-12). Researchers at the Thomas Jefferson University, Philadelphia made a startling discovery. They found leptin levels can be 318% higher in obese when compared to lean subjects (13).

In a nut shell; the more weight you gain, the less sensitive your body and brain become to the effects of leptin. You get into a perpetual cycle of eating more, gaining more weight and becoming more resistant to leptin.

Ghrelin is the major hunger stimulating hormone. Its action is more or less opposite to leptin. The cells in your stomach release this hormone in response to recent food intake (14). It has both short and long terms effects on your eating patterns and metabolism.

When you have not eaten in some time, your stomach releases ghrelin. Ghrelin then acts on your stomach itself and empties it further. Once your stomach is empty, it signals your brain that now is the time to fill up your tanks (15)! That is its short term effect.

In the longer run; not only does ghrelin make you eat more, but makes you lose less fat as well. In other words, it makes you put on more weight (16).

If your ghrelin level falls as you weigh more, then why does your hunger worsen?

The answer, again, is leptin resistance.

Although your ghrelin levels fall significantly, your body stops responding to leptin altogether.

The unopposed action of the remaining ghrelin makes you eat more than you should.

This family contains a lot of important hormones, but the most important are: Peptide YY (PYY) and neuropeptide Y (NPY).

PYY is a hormone secreted by your gut. It functions in a fashion like leptin, but targets a different brain area. It is so potent that a single dose of PYY is enough to reduce your appetite by 40% for 24 hours (18)!

NPY functions in a fashion opposite to PYY. It is a potent appetite inducer. It is so potent that mice given NPY preferred sugar over sex! It makes you eat more and increases your body fat content too (20).

Levels of NPY increase as you gain weight.

Do you tend to eat more when you are stressed? The one word answer is “cortisol”. Your adrenals produce this hormone when you are under stress.

Stress can make you eat more for several reasons (21-22).

First, it is a defense mechanism - the fight or flight phenomenon. It gives you energy to either fight or flee.

Second, eating causes the release of calming brain chemicals like dopamine. These chemicals counter the effects of cortisol and stress.

The participants of the UCSF Health Psychology Program were studied for their eating patterns during stressful situations. Under stress, participants ate more and craved for sugary stuff (23).

You can keep a food diary and journal to help you identify problem areas, and learn how to lose weight a healthy way rather than a crash diet. Try it Free for 24 hours.

You can keep a food diary and journal to help you identify problem areas, and learn how to lose weight a healthy way rather than a crash diet. Try it Free for 24 hours.

How Soon Could You Drop a Jeans Size?

Please select your sizes and see how soon you could be in those new Jeans!