Weigh-In Often to Keep the Weight Off

Many of us have a love/hate relationship with the bathroom scales... We know we need to track our progress so we can measure if what we're doing is working. But stepping on the scales with the daily fluctuations can elicit a range of emotions - from joy and pride to frustration and even despair.

Then there's the question of how often we should weigh ourselves..?

A growing body of evidence suggests that weighing yourself daily is better than a 'weekly weigh in'. In fact, it seems there's a clear 'dose-response' relationship between stepping on the scales and both weight loss, and weight gain prevention.

In a nutshell, the research shows:

So let's break it down and take a deeper look at the issue as whole...

What is the Evidence for Daily Weighing?

There have been many studies that explore the effects of daily 'self-weighing' on both weight loss and weight maintenance in the last 10 years. On the whole the results are extremely encouraging, in some cases even in the absence of additional dietary or activity based interventions.

Interestingly, not only do those who are overweight or obese see the greatest weight loss from stepping on the scales every day, but those of a healthy starting weight are more likely to gain weight without this type of frequent self monitoring...

The graphic below really helps to showcase the relationship between how often you get on the scales and it's effect on your weight - and this is pretty robust data; taken from the Healthworks trial, it includes 1,222 participants over a 2 year period1:

When it comes to losing weight many studies have found that stepping on the scales more than weekly produces significant results compared to weighing yourself only weekly or less.

Steinberg et al.2 found that frequent 'self-weighers' are more likely to achieve clinically significant losses of greater than 5% body weight (important for overall health and obesity related conditions). In fact, daily weighing can lead to average losses over 6 months of 6.5% of body weight, compared to only 0.35% of body weight lost without daily weighing.

With another study showing those who weighed daily lost on average 9.2lbs (4kg) over 3 months3, compared with just 4.5lbs (2kg) among those who weighed weekly, and yet another trial7 showing 6 month loss of 20lbs (9.2kg) for daily weighers vs. 9lbs (3.1kg) for those weighing less than daily - more than double the weight loss!

A detailed analysis of 17 recent studies4 on this issue showed that all 17 studies demonstrated that more frequent self-weighing is associated with:

There is a clear 'dose-response' relationship between how often you get on the scales and how much weight you lose or gain - the more days between weighing, the more likely you are to see a number higher than expected: 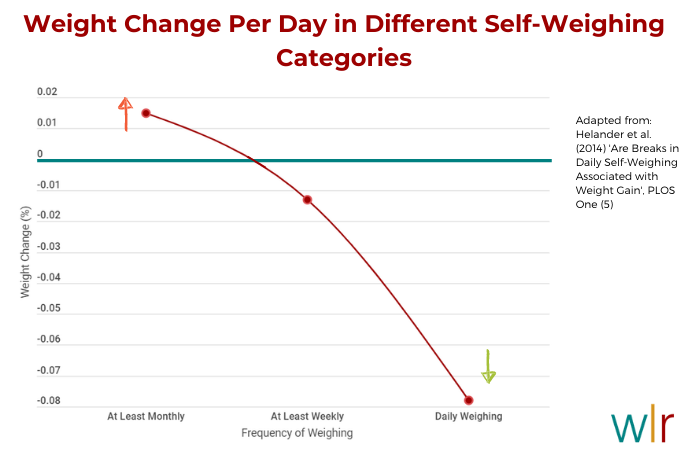 How does Weighing Myself Daily Help?

The theory is that the feedback you get from stepping on those scales every morning helps you to make small changes to your behaviour throughout the day - sometimes without even realising it!

Research has studied the extent and effects of frequent weighing on the thoughts and feelings related to the behaviour change needed for weight loss6 - participants found that weighing themselves daily affected their actions through the day... Even without specific action planning, daily weighing influences behaviour: 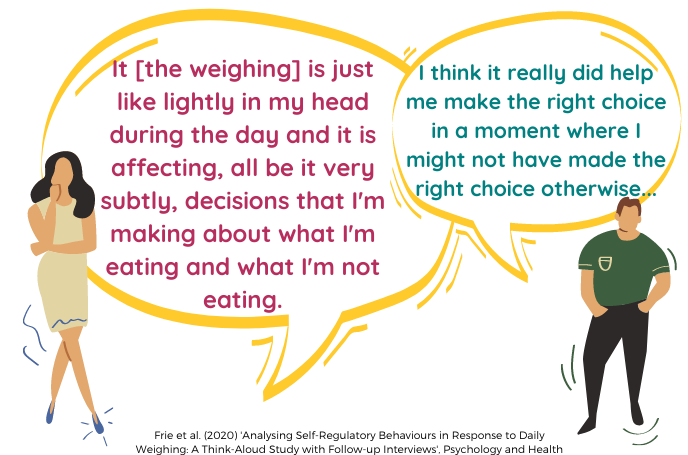 One particluar study7 looked in more detail at the behaviours that result from weighing daily that contribute to weight loss success...

They found that those who weighed more often engaged more often in behaviours that help with weight loss compared to those who didn't weigh every day. They were more likely to:

It seems that the act of stepping on the scales in the morning can, even without a lot of thought, help us to make small changes that lead to healthier habits and weight loss.

So, if this daily feedback is invaluable when you're trying to shift some lbs, why is it sometimes such an emotional roller-coaster? Do the emotional and psychological effects help or hinder weight loss...?

Although the research says getting on the scales daily can really help you towards your weight loss goals, it can be a little daunting...

You might think that an upward blip is likely to send you to the fridge for solace, or you may be worried that daily weighing might lead to negative body image issues - happily the science shows that this tends not to be the case. 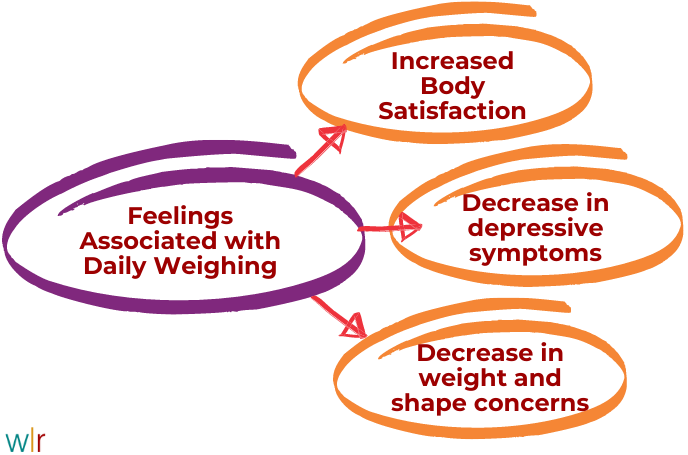 If you can try to be objective about daily fluctuations (more on this below), then overall, studies show the psychological impact of weighing yourself more frequently to actually be more positive - data demonstrates2, 4, 8, 9,10 higher scores associated with body positivity and satisfaction, and a decrease in negative associations (such as depressive symptoms and weight/shape concerns).

And, although it may feel a little difficult to deal with minor differences initially, one study6 reports that as time goes on and it becomes habitual, it gets much easier to be pragmatic and logical about the numbers on the scale - the level of emotion in the reaction decreases over time... 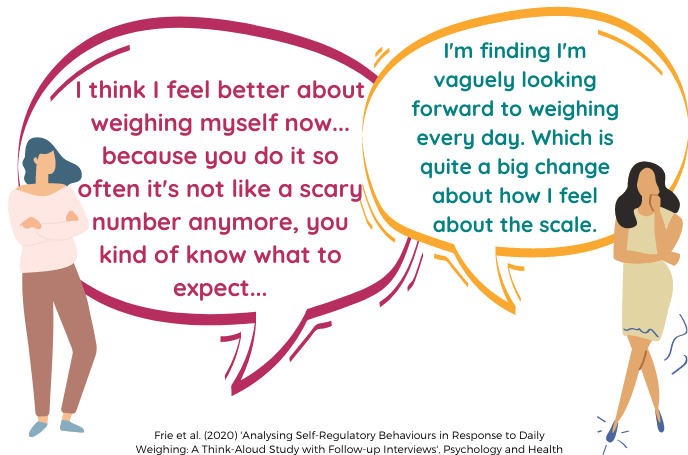 In addition, overall perceptions of participants in one study2 were positive - on a scale of 1-8 (where 8 is 'strongly agree' and 1 is 'strongly disagree), daily weighing scored very positively:

How do I Understand and Cope with Daily Fluctuations?

There are a number of reasons why your weight might fluctuate day-to-day that are absolutely nothing to do with your overall fat loss. This is why it's important to see the bigger picture and look at trends overall.

It's also an argument for daily weighing - if you only weigh in weekly and weigh in day happens to be an occasion where you're seeing an upward fluctuation, it can be all too easy to throw in the towel.

It's vital that you keep these 'fluctuating' factors in mind when weighing yourself daily - it'll help you to understand what's going on with your body and ease any anxiety that might normally come from a blip on the scales. Remember - to actually put on 1 lb of fat you'd need to eat 3,500 calories more than your body needs.

In most cases, unexpected 'weight gains' (or losses) are, directly or indirectly, down to fluid retention. The types of foods you've eaten, exercise, hormones, some medications, hydration, and alcohol intake can all affect the levels of water retention in your body at any given time.

If you're seeing unexpected results on the scales, and you know you've been sticking to a calorie deficit, water retention is the most likely culprit!

Aside from changing weight due to fat loss (Yay!) and building muscle mass (Yay!), here are some of the other common reasons for fluctuations on the scales:

The important thing is to look at the trend over a few days to a week - as long as you're on a downward trend your efforts are paying off.

It can sometimes be difficult to see past the immediate numbers on the scales, but some of our most successful members find that weighing daily, even with the ups and downs that it brings, is a really useful weight loss strategy:

"I used to be a slave to the scale [weekly] and lurched from elation to despair... The I starting weighing every single day. I found the daily fluctuation really interesting and it stopped me plunging into despair at a 1lb gain."  - Katiecate 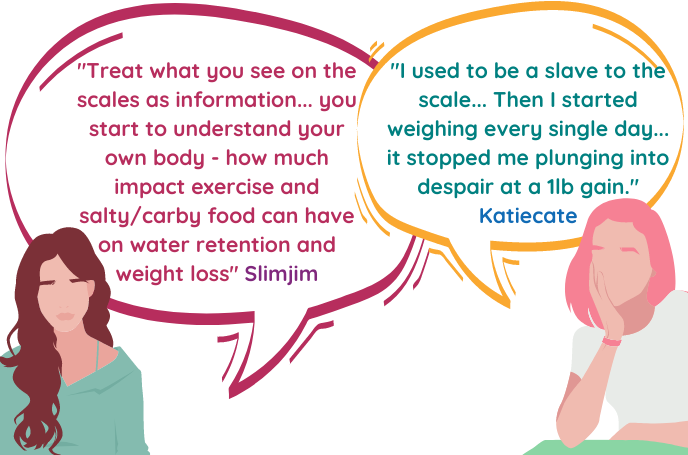 "The thing is to treat what you see on the scales as information... weight fluctuates. When you weigh daily you start to understand your own body - how much impact exercise and salty/carby food can have on water retention and weight loss" - Slimjim

In Practise - What's the Best Way to Weigh?

When should I weigh myself?

The best time of day to weigh yourself is:

For this reason most people prefer to have their scales in the bathroom - it's the perfect place considering the above recommendations; it's private and it becomes easy to make it part of your morning routine - just like brushing your teeth.

If it's not possible for you to do this, try to weigh at the same time of day every time, and if you have to wear clothes try to wear the same or similar and make them as light as possible. 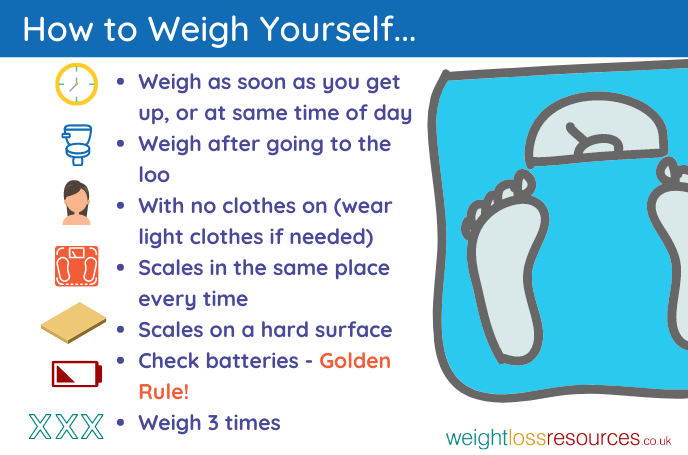 How should I weigh myself?

It's also important that you weigh with your scales in the same place each time - if they can't stay in the same position permanently, take note of markers to help you position them... Such as tile joins, lining up with furniture or other static objects, even a pattern or blemish on the wall or floor.

Hard surfaces are best... a soft, shaggy carpet will give different results as weight will not evenly distribute. A wooden or tiled floor will ensure you don't have this problem - if you don't have a hard floor a sturdy board to sit your scales on will help.

Weigh 3 times... it only takes a few seconds to step on the scales for a reading. Experience tells us that sometimes the first one is not quite right (the scales are only just waking up, after all!) Jump on three times and you'll get the most accurate picture as you'll know for certain the correct figure.

Golden Rule - Change the batteries regularly! Low batteries can produce some really erratic numbers... if you step on daily and something seems wildly out of whack, it usually is - the batteries!

How do I record my results when weighing daily?

The best way to record your results when weighing yourself frequently is by using something that gives you graphical, visual feedback on your overall trend. Graphs and charts where you can see this at a glance are an integral part of almost all the studies we looked at.

Ideally, you would make a note of your weight each day (it's easier than you think to forget), and either:

Some people choose to only 'officially' log the losses. Wlr members choose which method suits them best, so it's really up to you - the key is consistency.

"Record your weight every day on a graph and then you'll be able to see your weight trend which is far more important that your weight on particular days." - Islasgranny

"Weigh every day but take the average of the last 4 - it smooths out some of the random fluctuations, and shows the overall trend." - Ermintrude75

"I weigh daily, but just record my actual weight once a week on wlr. Then I can see the weight bounce around all it likes, and I don't take it to heart if it doesn't happen to say the number I think I deserve on weigh in day." - Vivcole

"I won't log gains... My graph has to show a downward trend or I will falter. I weigh daily... so I see the ups and downs, but I don't want to see them on my weight loss graph" - Rhiannon

Want to record your weight? Get a free professionally designed Weight Graph PDF with our fortnightly newsletter. Simply enter your first name and email (never shared).

If you want to plot your weigh ins easily online, the tools in Weight Loss Resources will help you keep track of your progress towards your goals - take a look yourself... Try WLR free for 24 hours.

1. Pacanowski et al. (2014) 'Daily Self Weighing to Control Body Weight in Adults: A Critical Review of the Literature', Sage Open

If you want to plot your weigh ins easily online, the tools in Weight Loss Resources will help you keep track of your progress towards your goals - take a look yourself... Try WLR free for 24 hours. 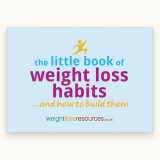