How Long Does It Take to Lose Weight?

Almost everyone who wants to lose weight, wants to lose it as quickly as possible. But we're also getting wise to the effects of yo-yo dieting.

Who really wants to go through all the pain of deprivation and yukky food for a weight loss that seems to disappear under a new layer of fat incredibly fast?

If you're looking for a longer term solution that works with your lifestyle with food you enjoy, you've come to the right place.

So what does successful weight Loss look like, and how long does it really take to lose weight?

Not that temporary half a stone that's mostly made up of depleted muscle stores and water, but permanent and sustainable loss.

All the graphs below are exact copies of the real graphs of successful WLR members, with a range of starting weights and at different points along their respective weight loss journeys. We have changed names and omitted dates to protect members’ privacy. 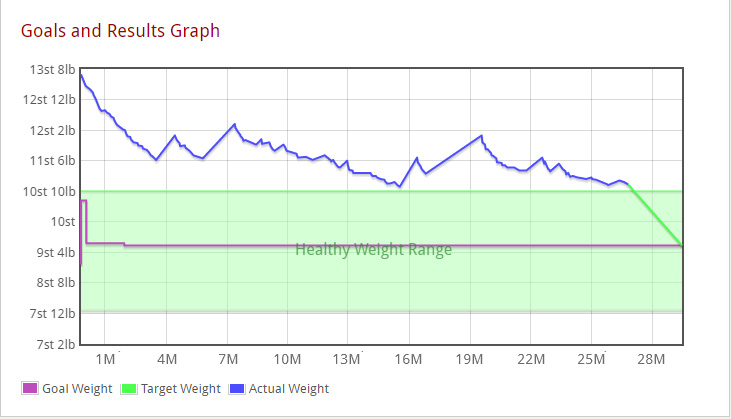 Marjoram started off all guns blazing with a 2 stone loss in 3 months – around 2.3 lbs a week. This is a seemingly great result but, as the graph shows, not entirely sustainable.

It’s likely that Marjoram became fed up with having to be so strict all the time – resulting in a regain of 10-12lbs over the next few months. However, despite the ups and downs, Marjoram has lost nearly 3 stone in just over a year and is within touching distance of her healthy weight range.

That’s an overall average loss of about ¾lb a week. It’s possible that Marjoram may have found it a little easier (on mind and body), if she had set an initial target to lose 1lb a week rather than two. This would have added around 400-500 calories a day to her calorie allowance. That’s quite a lot of extra food, with room for treats and drinks, making the whole weight loss experience much easier. 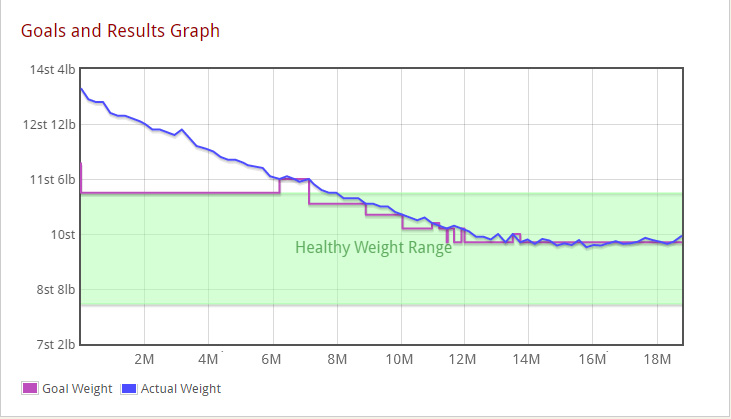 Cinnamon’s graph is a perfect example of how steady weight loss, based on habit changes you can live with, provides the right conditions for weight maintenance.

Cinnamon lost 3 stone 10lbs in a year, an average of 1lb a week. Better still she has been able to maintain that loss to within a pound or two up and down. 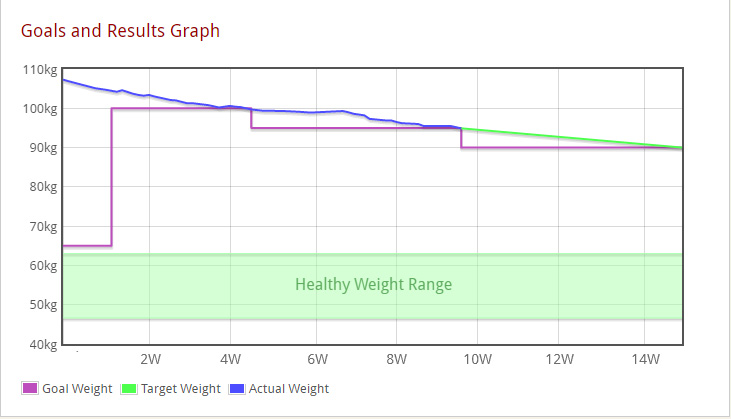 An impressive 8 kgs are lost in the first four weeks of Basil’s weight loss. The problem is that losing 2kg (4.4lbs) a week is not sustainable over the longer time Basil needs, if his goal is to get within a healthy weight range. The graph shows about 4 weeks of maintenance after the initial blast – which is actually really good going after such a large quick loss.

Then the graph settles down to a more realistic average of 1kg (2.2lb) a week. This is still quite a fast rate of loss, but is sustainable where somebody is starting out at quite a high weight – in this instance 108kg (17 stones).

This is because, generally speaking, the more you weigh the more calories you need. When Basil gets closer to his healthy weight range he’ll probably need to slow down his rate of weight loss, in order to ensure his diet doesn’t become overly restrictive and difficult to live with. 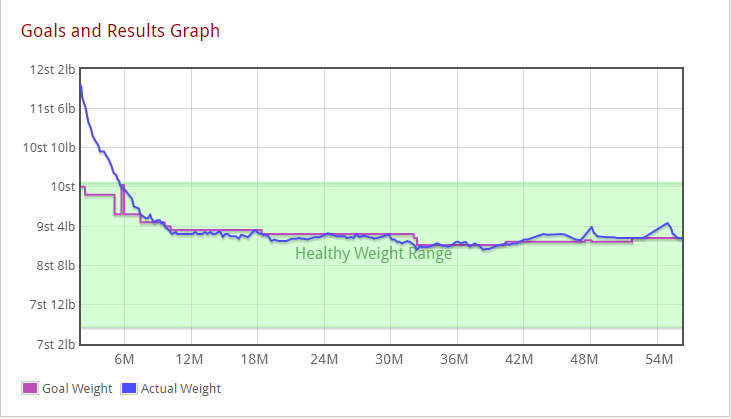 Saffron lost 2 stone 10lbs in 10 months – an average of just under a pound a week.

The beauty of this graph is it shows that losing weight at sensible and steady rate makes maintenance much more likely. Saffron has maintained her 9 stone to 9 stone 4 range for nearly four years - that’s a fabulous result.

Want to record your weight? 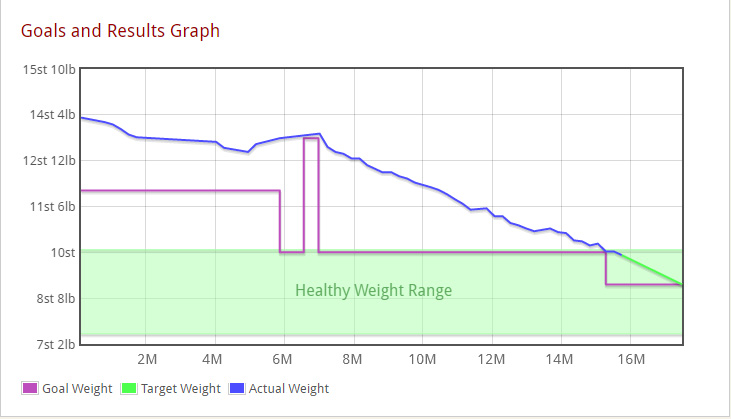 Nigella’s graph is quite interesting, showing that it can take some time to get in the swing when you’re trying to change your habits.

But after a fairly hesitant start, losing just a stone overall in the first 7 months or so, Nigella goes on to lose a further 3½ stone in the following 9 months at a steady and sustainable rate of 1¼ pounds a week. 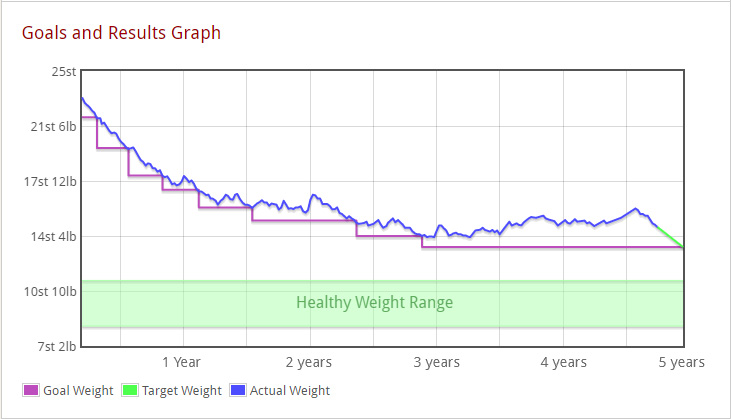 This is slow and steady weight loss that works over the long term. The first year’s rate of loss is around 1.3lbs a week, followed by an average of just over half a pound a week in years 2 and 3. 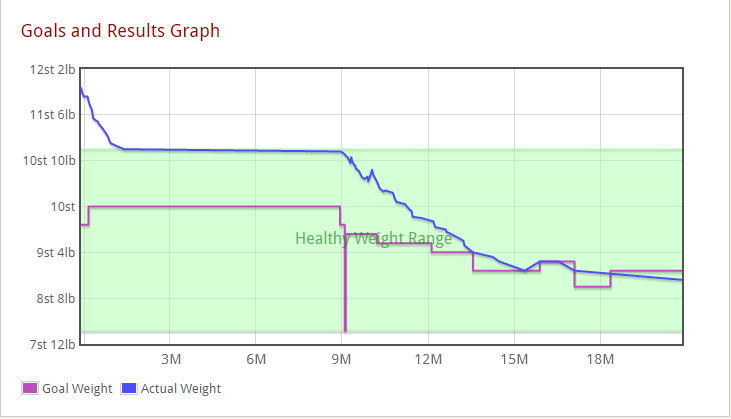 The faster initial weight loss Allspice achieved – a stone in six weeks, is followed by a 7½ month period of maintenance.

It’s not clear if Allspice needed a break from the restriction of losing weight at such a quick rate, or whether life just got in the way – as it frequently does!

In any event Allspice continues her journey to her goal weight, losing weight at the easier to live with rate of just over a pound a week. Dropping a further 2 stone in six months and maintaining that loss over the next six months.

So, How Long Does it Take to Lose Weight ?

On the whole, our successful losers graphs suggest that a rate of loss of around a pound a week produces the best results for:

What's a Good Rate of Loss for You?

You can use the tools in WLR to see how different rates of loss would affect when you'd reach your goal and how easy, or hard, it would be to stick to. Try it free for 24 hours.

What's a Good Rate of Loss for You?

You can use the tools in WLR to see how different rates of loss would affect when you'd reach your goal and how easy, or hard, it would be to stick to. Try it free for 24 hours.