By Trudi Purdy, wlr team (and other adventurous members of the wlr team)

So, we were very excited to hear about Lo-Dough, possibly a low calorie, low carb dream come true.

Lo-Dough is new type of food - a unique low carb bread. It resembles bread (the makers call it 'bread reinvented') and is marketed as a diet friendly alternative to various types of bread and pastry.

It’s 39 calories a piece, very low carb, and is gluten and sugar free.

And, the most exciting bit for me, according to the peeps at Lo-Dough, you can make a pizza (ham & mushroom) with it for just 170 calories.

Pizza every day anyone?

Other uses for Lo-Dough are pasties, wraps, kebabs, quiches, cakes, cheesecakes, pies and more. The website has recipes and a how to use guide.

This all sounds pretty good for people wanting to lose weight, so here's our review. Thanks to Lo-Dough for sending us some to try... and sometimes burn :) 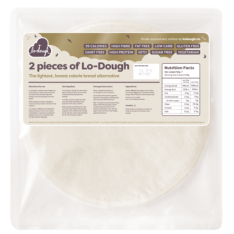 You can only get Lo-Dough online at the moment and it’s not exactly cheap. It costs from just under £2 to up to £2.50 per piece depending on what pack size you buy. You can order just 2 pieces for £5 to see what you think to it first.

Each piece comes as a round and is 9” in diameter.

It’s suitable for vegetarians but not vegans as it has dried egg white in it. It is gluten, dairy and yeast free and can be frozen.

So how does it work (and what does it taste like)?

Jo, Becky, Rory and Lewis were the (some would say brave) members of the team who volunteered to try Lo-Dough out and share their opinions. 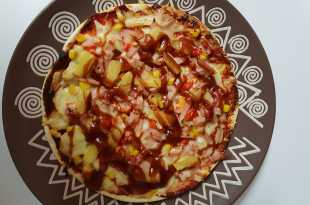 ‘My first impressions weren’t great when I took the Lo-Dough out of the packet. There was a slight chemical smell and the dough resembled polystyrene.

‘Eating it felt very unnatural. It didn’t really taste of anything.

‘However, my pizza was edible and, I think, this would be ideal for people wanting to lose weight.’

Becky made good-looking pizza and a wrap 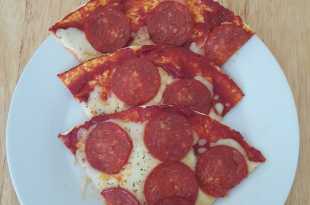 ‘I made cheese, tomato and pepperoni pizza for the kids’ tea and they quite liked it. Not sure that’s a proper recommendation though!

‘The kids normally prefer a thin crust pizza but me and hubby like a thicker crust so, this was a bit thin and crispy for me.

‘My hubby decided to use a piece of Lo-Dough as a wrap for lunch the next day.

‘He had ham, salad and mustard for the filling and fried the wrap off as suggested. At lunchtime, I got a text from him. He asked, Is this actually human food?

‘He said it sucked all the taste out of the filling and tasted like packaging.’

So, not a winner as a wrap then?

Lewis fluffed the pasty and ended up with nachos

(Hint: he didn't submit a photo with his review)

‘I whacked some filling in a cut out round of Lo-Dough and wet the edges with water to make a pasty. It just came unstuck.

‘I tried crimping it, again with water and it came unstuck again.

‘I decided to try frying it into nachos as suggested in the recipes.

‘They were awful so, at this point I gave up on Lo-Dough and life!’

(Our Lewis can be a little dramatic sometimes!)

Jo made 2 pizzas and one burnt offering 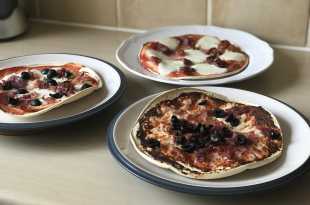 ‘I have to say, I was mightily disappointed with our lo-dough pizzas.

‘Was a bit unnerved by how light they were - but for less than 40 calories, what do you expect? Out of the pack, the texture was kinda rubbery raw, but I hoped that would improve with cooking . . . so I rustled them up in pizzas for lunch using our favourite passata, mozzarella and proscuitto topping.

‘The boys made their own - but I didn’t realise, until they were in the oven, that it was essential to spread the pizza topping ALL the way to the edges (otherwise they curl up - see photo)

‘Nevertheless, we were hungry and mine looked pretty good:

‘Unfortunately, appearances can be deceiving. The Lo-Dough was nothing like pizza dough. The pizza was disappointingly un-pizza-like. One child questioned if it was even healthy cos it seemed so artificial.

‘I would have thrown them straight in the bin, except I didn’t want to waste the topping... but even I, who never leaves anything, gave in and picked the topping off and binned some of the base.

‘My verdict: disgusting, best avoided, would never use again.

‘In fact I’d much prefer to do some exercise and enjoy my favourite pizza topping on a tortilla wrap instead!’

Not an overly positive experience with those in the wlr office that tried it. But maybe we’re a little fussy?

I checked for some online reviews. They were a bit of a mixed bag. It seems Lo-Dough is Marmite all over again. (Though maybe with more of a tolerate/hate rather than a love/hate relationship.)

I personally am chuffed with it. Its major drawback is that it's expensive but for someone with my problems I can cope with that. I'll use it sparingly - one (maybe two) a week. Just for me - visitors will have the usual wheat and yeast wraps or pittas.

Not a bad swap for low carb alternative.

It’s a healthier alternative to wraps and pizza bases etc so why other customers would assume this product would perfectly mimic their favourite fast food choices without the fat and calories is ridiculous. Pan fried with a bit of olive oil, folded over with lamb, Greek yoghurt and pomegranate salad – perfect

Expensive and tastes like cardboard, got fooled by pretty pictures but it’s mutton dressed as lamb and I was thoroughly disappointed.

How else are you going to have low carb pizza?

I have no idea how this made it to market. It’s like eating several sheets of paper.

The general consensus is not to expect Lo-Dough to be exactly the same as the food item you are replacing.

It’s not the same.

Make whatever you cook about the filling, topping etc rather than the base or wrap.

Let us know if you have tried it and what you thought of it.

From meal and snack ideas, to mix and match diet plans, check out the all-in-one wlr food diary. You can try it free

If you fancy giving Lo-Dough a try their website has plenty of recipe ideas, information and customer reviews.

From meal and snack ideas, to mix and match diet plans, check out the all-in-one wlr food diary. You can try it free