Run the Parkrun? Are you Kidding?

Ever heard of the parkrun? No, me neither until October last year.

I was about 4 months into my 4 stone weight loss and was walking quite a bit. Earning extra calories for the exercise I was doing so I could have my skinny lattes and the occasional bacon sandwich treat. But running? Phahahahahahahaha! Not a chance!

If anyone suggested Couch to 5K, or any kind of movement faster than a walk, I would say,

“This body is not built for running. I’m 46 for goodness sake!”

“If I ever see a jogger running along and smiling, then I’ll think about it.”

Well, that was a year ago.

Now I am a regular at my local parkrun.

My sister happened, that’s what! She goes to the gym 5 or 6 times a week, runs, cycles, spins, has a personal trainer etc. The complete opposite of me. She suggested I join her at parkrun.

“You can walk it Trudi. Lots of people do. You don’t have to run it.”

All I can say is, don’t trust your very active sister! 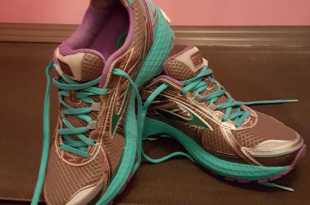 I should have been suspicious when she suggested she buy me some ‘decent trainers’ for my upcoming birthday.

I duly turned up at the local country park on a reasonably nice October Saturday, kitted out in my new trainers and running socks. Very apprehensive and very self conscious.

My sister said there would be all shapes, sizes and ages. I was more than a little sceptical but she was totally right!

There were kids, people with buggies, a disabled lad with a really cool bike he ‘cycled’ with his arms, people with dogs, George who is 80+ (or so it says on the back of his t-shirt!). And the atmosphere was brilliant.

I felt so welcome, not out of place at all and like I could actually do this!

Groups of people stood chatting and laughing, mingling, hugging each other. I was not the fish out of water that I expected to be!

At 10 to nine, I joined the ‘first timers’ briefing where they explained the route and the ‘rules’ (there aren’t many). Then the Run Director did a warm up speech. He congratulated people on their 50th parkrun (!), a hen do that were running together veil and all, mentioned birthdays, while we clapped and cheered. All 600 of us!

Then we headed off to the start. This is where my sister revealed her evil agenda!

“I thought we could start off with a gentle jog and just keep going til you can’t anymore, then we’ll do a fast walk okay?”

I must have been carried away with the atmosphere because I agreed! It could have been the fact that I was surrounded by all these people of various shapes, sizes and ages, I had a feeling of invincibility. I looked round at everyone and thought,

That first parkrun was a real mix of fast walking and jogging but, I got round it. It was hard, my breathing sounded like a steam train and my leg muscles were screaming at me but, I did it.

I even sprinted (sort of) over the finish line to huge encouragement from the volunteer marshalls and my sister. My time was 49 minutes. 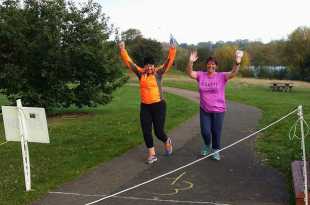 "I am not ashamed to say I cried. Yep, bawled like a baby!"

I was a tad emotional (lol)! I was filled with a huge sense of pride, relieved that it was over and totally amazed that I was still alive!

But this picture has never rung as true as it did that day! 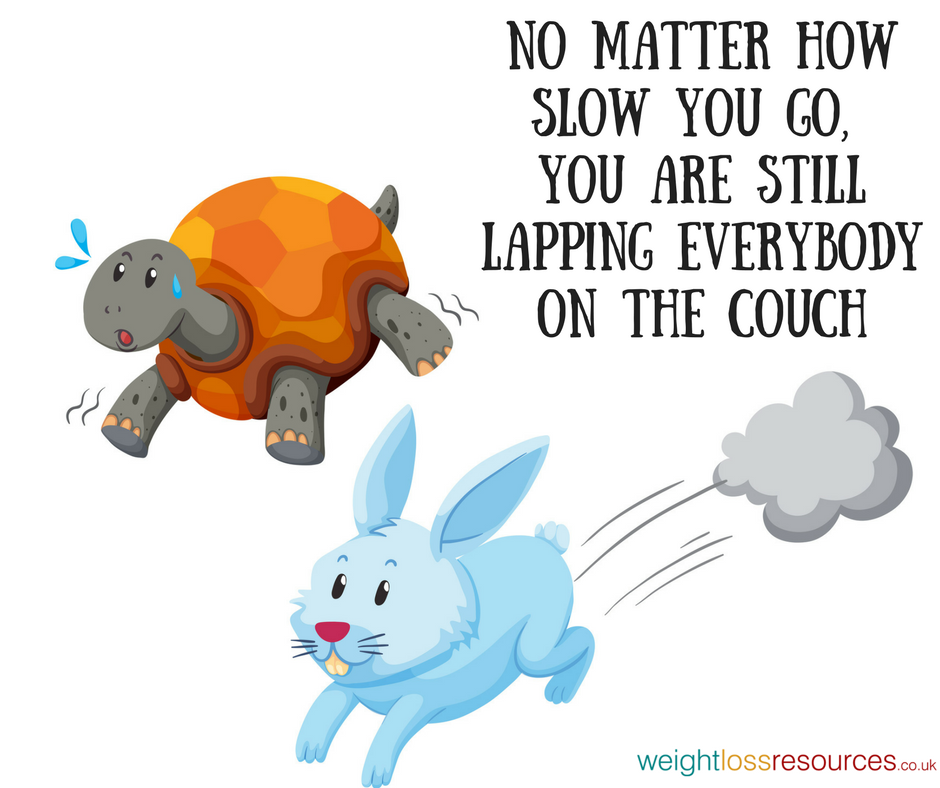 That first parkrun will stay forever in my heart. The atmosphere, the inclusiveness of parkrun, the encouragement from the marshalls and my fellow runners, my sense of pride and amazement – it will always be special.

As my weight loss journey continued, so did my love for the parkrun.

I’m still not a fan of running but, every Saturday, come rain or shine, I join my fellow parkrunners at the start line. I can run it without stopping now.

I am part of something; we share the pain and the triumphs. parkrun is like nothing I have ever experienced before. I like to think of it as parkrun power!

On the odd occasion that I can’t make it, I miss it. I won’t lie and say I look forward to it, and I have to be honest and say that I am thinking about my latte and bacon sandwich the whole way round.

But every time I cross the finish line, it reminds me of what I am actually capable of, what I can achieve and how far I have come in just a year. I now run it in under 35 minutes.

My advice to anyone starting out, or on their weight loss journey?

Check out your local parkrun, you may surprise yourself. And find some people to join you. You'll spur each other on.

These days, there are a few of us that go every Saturday. A couple of colleagues from WLR, a couple of my friends and, of course, my taskmaster sister! We are #teamparkrun! 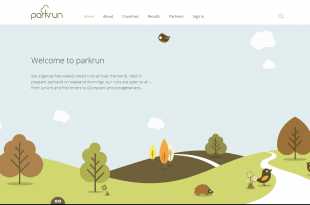 The first parkrun took place in 2004 at Bushy Park, Teddington. Paul Sinton-Hewitt, 55, an IT worker who ran for South London Harriers athletics club, decided to set up a different kind of event after getting a hernia and torn hamstring. He says,

“All of a sudden, you're the person who comes to the club to see your friends while everyone else goes running – and the last thing I wanted to do was sit in the clubhouse, waiting to socialise,”

“I'd been the recipient of lots of people's goodwill, and decided it was time to give back. With parkrun, I could get my mates to come and see me every Saturday, which was selfish – but I could also give something back to the community.”

At that first parkrun, 13 runners got together to run. The volunteers collated their timing results on paper and the finish tokens were washers from the local hardware store.

parkrun has been a total runaway success since that first gathering. Always run by volunteers, it's totally free to take part. And the emphasis is on it being a run, not a race. The only person you are in competition with is yourself!

To get your time, you need to register on the site and download a barcode - make sure you take a physical copy with you as they have to scan it to work out your time. Simon says,

“I'm surprised something so simple and obvious has become a runaway success. But it's free, it's community-owned and it speaks to the things people really want.”

By 2007, events evolved to Wimbledon, Richmond, Banstead, Leeds and Brighton. The first international event was created in Zimbabwe.

By 2011 there were 55 new events, with the first events introduced in Australia, South Africa and Poland. There was also a special event in the UK army base at Camp Bastion in Afghanistan.

In 2013 Parkrun introduced a Junior series, a weekly 2km event for children.

Now there are parkruns in:

Run Your Way to Weight Loss

See how many calories you burn through running, and how many you'll need each day to lose weight - simply register for free access to WLR Start Now

Run Your Way to Weight Loss

See how many calories you burn through running, and how many you'll need each day to lose weight - simply register for free access to WLR Start Now