Exercise Can Make You Happy

Research showing that physical activity can reduce depression and anxiety has led to exercise being prescribed to help with these kinds of negative mental health conditions.

However, less is known about the impact of physical activity on positive mental health, such as happiness and contentment.

The researchers for this systematic review examined 23 studies on happiness and physical activity to see if exercise increased positive mental health in the same way it reduced negative mental health.

"More importantly, even a small change of physical activity makes a difference in happiness."

The research also suggests an upper limit to the effect of physical activity on happiness.

This review was carried out by Weiyun Chen, University of Michigan associate professor in kinesiology, and co-author Zhanjia Zhang, a doctoral student.

Of the 23 studies they reviewed, 15 were observational and 8 interventional.

The researchers examined which aspects of physical activity were associated with happiness, and which populations were likely to benefit from the effects.

The observational studies all showed a positive direct or indirect association between happiness and exercise. The interventional studies showed inconsistent results. 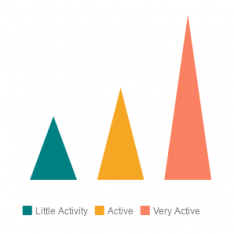 The review of observational studies found that compared to inactive people, the odds ratio of being happy was:

Several studies reviewed the relationship between physical activity and happiness in youth:

Three studies looked at happiness and activity in older adults:

Four of the intervention studies showed a significant difference in change of happiness between intervention group and control group, and three did not.

The review only looked at articles in peer-reviewed journals in English, which could lead to publication bias and overestimating the positive relationship between physical activity and happiness.

Because there were limited randomized control trials, the researchers could not establish causation between happiness and physical activity.

What Would Exercise Mean for Your Weight?

You can find out what's possible at different background activity levels, and doing different types of exercise, here on wlr. Take a free trial and have a play with the tools

A systematic review of the relationship between physical activity and happiness Zhanjia Zhang, Weiyun Chen

What Would Exercise Mean for Your Weight?

You can find out what's possible at different background activity levels, and doing different types of exercise, here on wlr. Take a free trial and have a play with the tools