Can Bouncing Get You Fit?

I loved the trampoline as a child – who didn’t?

Jumping up and down gave me a real sense of freedom and abandon.

Who knew that something I loved as a kid and found easy could be a real workout?

Fast forward too many years to count and the child within me is still filled with glee at the sight of a trampoline . . . but the adult is filled with dread!

Mostly because I am a woman of a certain age who has had children and I sometimes suffer from ‘that bladder issue’!

But also because I no longer have the ‘no fear’ attitude that I had as a child. Why is it that, as you get older, things you wouldn’t have thought twice about, suddenly become a worry?

I worry about hurting myself these days.

Anyway, I had seen a few of my friends on social media rave about a new trampoline fitness class. So, because we like to bring fun ways of getting fit, I bit the bullet and started researching.

NASA studies have found that rebound exercise is the most efficient. Their studies prove it's 3 times more beneficial than a stationary workout.

“For similar levels of heart rate and oxygen consumption, the magnitude of the biomechanical stimuli is greater with jumping than with running . . .”

Astronauts can lose as much as 15% of their bone and muscle mass from only 14 days at Zero Gravity. So NASA uses rebounding to help them recover.

My local trampoline park offers something called Reboot Fitness. I managed to rope in our designer, Jo and we booked our slot. (Not sure that Monday morning at 10am was the best choice though!) 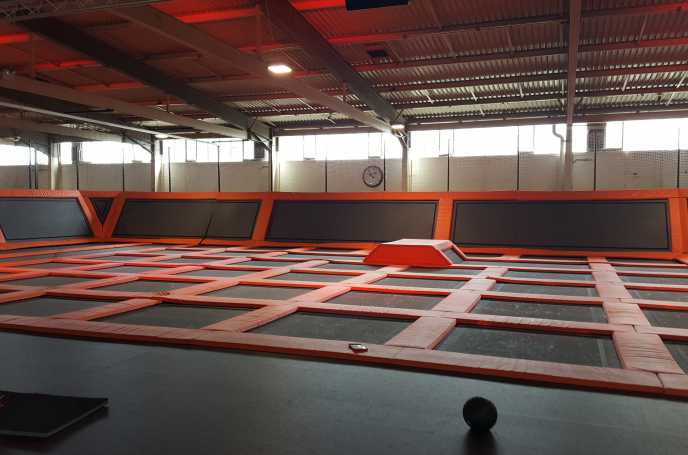 The trampoline park runs sessions when it’s not normally open to the general public. That meant we wouldn’t have to deal with toddlers proving they were fitter than we were!

The class was a mix of people – some were bounce fit veterans, some had been a few times and a few were newbies like us.

What happens in a class?

Structured in a similar way to a bootcamp, there are a variety of exercises both on and off the trampoline.

We spent the first 20 minutes doing various exercises on the trampolines. 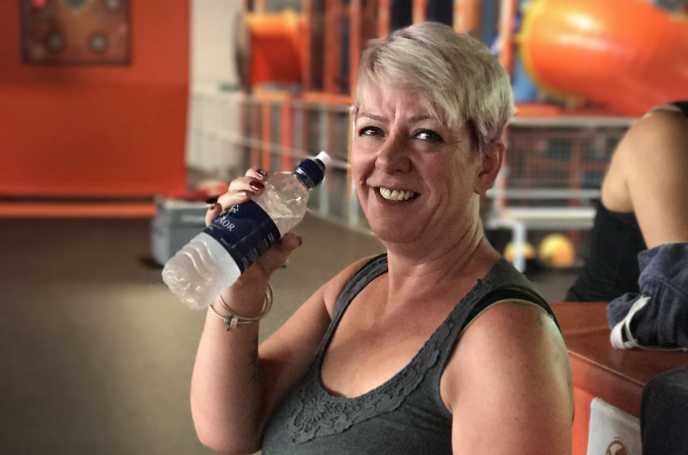 The instructor, Mike, made sure we had water breaks. These exercises were done at a reasonably high intensity.

The next 20 minutes involved circuits with battle ropes, slam balls and Bulgarian bags and were off the trampoline. We did sit ups, squats and a kind of burpee thing with a slam ball but without the jump.

The final 20 minutes took us back to the trampolines for some more drills. This is where I encountered the ‘dying fly’!

The ‘dying fly’ was one of the last drills we did. To do it, you lay on your back, with your legs and arms up in the air and then you bring your knees down to your chest in a sharp movement. The momentum from this movement bounces you up off the trampoline and you continue.

Mike, made this look elegant. I looked like a dying fly!

Mike said he adopted Variable Intensity Training. This means you work as hard and fast as YOU can, not worrying about how hard and fast the others in the group are going. I liked that idea. It means you can build up your speed etc at your own pace.

I felt like I got a good workout that got me moving in different ways. It definitely worked muscles I don’t normally. Namely, the insides of my thighs, tummy and shoulders. All three were grumbling a little the next day.

My heart rate increased, I got sweaty and I giggled – a thumbs up from me for Reboot Fitness. It was really good fun!

Oh, and the ‘bladder issue’ didn’t happen. I made sure I went to the toilet at the beginning and was fine all the way through! 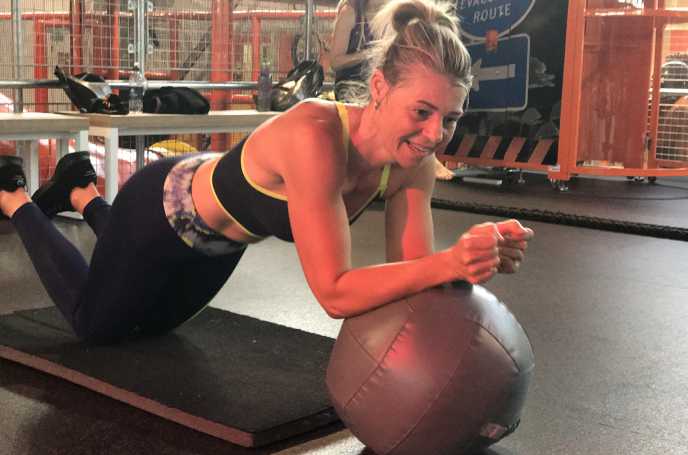 Have a look at what our designer thought to it.

‘The most fun I've had at an exercise class. Ever! I hadn't really known what to expect beforehand. A friend had jokingly described it as ‘torture you pay for’, which I felt didn't bode too well.

‘It was fun from the outset. I haven't been on a trampoline since I got whiplash on one back at school, 20 something years ago... So I was a little unsure of the bounce at first - those little trampolines sure do bounce.

‘It's hard to control direction at first, I spent the warm-up giggling to myself. (A great workout in its own right!)

‘The exercise sets sure feel like you're doing a proper workout. It really helped that the instructor explained to the newbies that the aim was to just complete the time doing what you can (rather than trying to keep up with others). 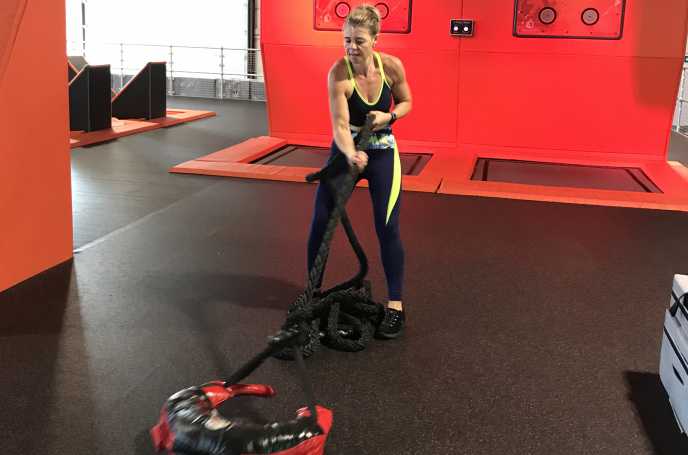 ‘Since I had expected it all to be trampoline based, the circuits were, for me, an added bonus. (And a welcome ‘break’ since the legs had just about reached their limit!) I thoroughly enjoyed the circuit workouts - I'd never have willingly signed up for them, but I would now . . . Again, these were timed with rotations, so you really do try harder than you would otherwise. I noticed the instructor even added some additional exercises in for one of the ladies who had a wrist strap - really nice touch.

‘All in all, it was a fantastic class - fun, challenging, totally different to anything I've ever tried before.

‘Torture’? Maybe a little, but a rather enjoyable torture! I'm sure they'll be pain later, I've definitely used muscles I don't normally . . . yet, despite that, I'd certainly return.’

Tracey is a nurse and fits Reboot Fitness in as and when she can. She says,

‘I really enjoy the class because it's a mixture of cardio and body conditioning and you can work to your own ability. If you need to stop you can.

‘I think it’s fun and doesn't feel like you’re exercising. All the staff are very friendly and Mike is a great instructor. He really helps you and explains how to do the exercise if you’re unsure! 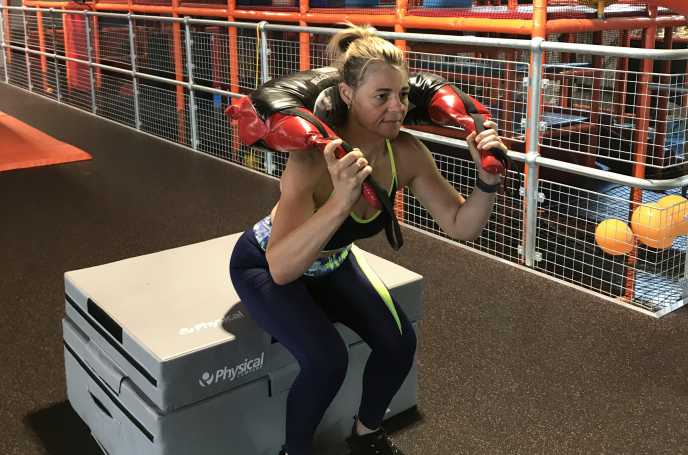 ‘I've found by doing the reboot classes my body is a lot more toned!

‘I don't mind going to the classes on my own as everyone is so nice and chats to you!

‘The venue offers a free trial session which it brilliant. You can see if it’s for you or not. I love it and I'm now hooked!’

Bounce GB have a special offer on at the moment – 12 sessions for the price of 10. But, even if you haven’t got a Bounce GB near you, do some research and see if another company offers similar. Trampoline parks seem to be springing up all over the place! (See what I did there?)