Lacking the motivation to exercise? You may know that working out is good for your health and your waistline, but did you know it could also help to reduce your risk of developing dementia? Christina Macdonald, Online Editor for The Alzheimer’s Show, explains why.

Most of us know that regular exercise is good for our heart health and general wellbeing, but you may not know that it can also help to reduce your risk of developing dementia.

According to Alzheimer’s Society, there are around 850,000 people affected by dementia in the UK. Some 225,000 people will develop dementia this year, which equates to one person every three minutes.

Alzheimer’s disease is the most common form of dementia. It affects more than 520,000 people in the UK.

Alzheimer’s occurs when proteins build up in the brain, resulting in structures called ‘plaques’ and ‘tangles’ disrupting connections between nerve cells, eventually causing them to die. Some of the symptoms include memory loss, confusion, loss of concentration and difficulty learning new skills.

However, the good news is that regular cardiovascular exercise, like running, jogging, cycling, swimming or brisk walking, may help to reduce your risk of dementia.

Alzheimer’s Society thinks regular exercise could also play a role in protecting the brain from cognitive impairment and helping those who have dementia lead more fulfilling lives. A trial showed that regular exercise helped those diagnosed with Alzheimer’s disease to manage behaviour associated with the condition, such as anxiety or irritability.

Regular exercise may also help to reduce your risk of high blood pressure, which is associated with vascular dementia, the second most common form of dementia that affects 150,000 people in the UK.

Vascular dementia is caused by reduced blood flow to the brain, which occurs because of a stroke, a series of mini strokes, or due to the hardening and narrowing of arteries (atherosclerosis).

Vascular dementia is most prevalent in smokers, those with high blood pressure, Type 2 diabetes, obesity or heart problems. Age is also another risk factor.

Regular exercise can help to reduce risk of high blood pressure and also reduce your waistline and lower your risk of developing Type 2 diabetes and obesity, all of which are factors that may lead to vascular dementia.

Various studies have been analysed on the effects of physical exercise, like running, on middle-aged people.

Combining the results of 11 studies shows that regular exercise can significantly reduce the risk of developing dementia by about 30 per cent. The risk of Alzheimer’s disease (the most common type of dementia) was reduced by 45 per cent.

Older people can also benefit from exercise for brain health. In a study of 716 people with an average age of 82 years, people in the bottom ten per cent in terms of the amount of their daily physical activity were more than twice as likely to develop Alzheimer’s disease as those in the top ten per cent.

In a modest-sized clinical trial, one year of aerobic (cardiovascular) exercise showed a small increase in the size of the hippocampus (the key brain area involved in memory). This was the equivalent to reversing one to two years of age-related shrinkage.

Popular On This Topic 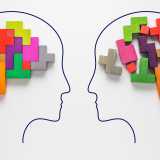 Those who adhered to at least four of the five specified healthy behaviours were found to have a 60% lower risk of Alzheimer's, find out more