Hugh is asking the big questions in this series. He pushes some of the biggest food companies and restaurant chains to become more transparent about what is in the foods they are selling and he asks the government what they are doing to tackle this health crisis.

He also kicks off an ambitiious project to see how much weight an entire city can lose over the course of a year.

Obesity is one of the leading causes of premature death and with two thirds of us being overweight, Britain is well on its way to being the most obese country in Western Europe. But is it any surprise with the amount of food that is on offer on any high street in the UK? Hugh said,

‘Everywhere we go, we are being bombarded with offers of food that seem impossible to resist.’

The Children Are the Future?

Our children are also being affected. Nearly ⅓ of children aged 2-15 are already overweight or obese.

The food that is aimed at children, even ones we think of as healthy, are high in salt, sugar and fat.

Hugh took some kids shopping, without their parents, to see what foods they would buy for their families to eat.

Of course, the kids made a beeline for the chocolate, sweets and fizzy drinks. But they also chose the breakfast cereals that were really high in sugar – with the ones that were chocolate-based being the most popular.

A lot of what the kids chose were branded goods – the ones they would have seen in adverts on TV.

When it came to the fruit and veg aisle, some of the kids got fruit but none got vegetables.

No shockers there really but . . .

Let’s take a closer look at the cereals.

Even those cereals that the parents said they would normally have at home proved to be a bit problematic.

The boxes had sporty, fun looking characters on the front of them – a snowboarding penguin and a sporty squirrel. With banners on them declaring that they were made from wholegrains and were high in fibre and calcium – you would assume these cereals would be okay wouldn’t you. But take a look at the traffic light labelling on them and it tells a different story.

The first issue was that the cereals from the two biggest brands, Kellogg’s and Nestlé, had the traffic light labels in black and white – traffic light’s only really work when they are in colour and the green, red and amber labels are clear.

The next issue is the amount of sugar in the cereals. In one serving (30g) of one of the cereals there was a massive 9.3g of sugar. In the nutritional info it says that’s 10% of the reference intake but that reference intake is for an adult – a child needs half that!

Hugh contacted Kellogg’s and Nestlé regarding the traffic light labels on their cereal boxes. Both companies said they didn’t have anyone available for Hugh to interview about the issue, even when Hugh turned up at their headquarters.

However, Nestlé’s public relations rep did eventually talk to Hugh and, in an email he received later, told him they were going to change their packaging so the traffic light labels would be in colour. Not such a good response from Kellogg’s but Kudos to Nestlé!

Back in the Day

In the 50s only 2% of the population was obese. Researchers suggest this is down to the fact that sweets and treats weren’t so readily available and we were more active – at work and at play. Today that figure has increased over 10 times.

Hugh enlisted the help of Dr Giles Yeo of Cambridge University to understand what has happened.

Dr Yeo says things started to change when fast food became more readily available and you could order it for delivery to your doorstep.

In 1985, Domino’s launched the first fast food delivery service and it has snowballed since then.

‘Now, clearly Domino’s is not ‘the’ cause of it, but I think it was an indicator, a marker for when the problems actually began.’

Dr Yeo said his colleagues have shown that the more takeaways you live near, the more you are likely to eat – not rocket science but . . .

You only have to stand in a normal high street and take a look at the amount of food outlets there are to see how the country has got to the current situation.

And we are a nation of snackers. Dr Yeo says we consume more crisps, for example, than the rest of Europe.

It doesn’t help that our perception of being overweight has changed too. Dr Yeo says we now see overweight as normal. More than half of the men in the UK that are classed as ‘overweight’ don’t realise they are.

Even Hugh got a shock when he checked in with his doctor. He is considered to be overweight and, because of his tummy circumference, is considered to be at risk of diabetes. Although he is in much better shape than he was in the 90s having got his eating under control over the last few years.

The obesity crisis is putting the already stretched NHS under huge pressure. We now spend more each year on the treatment of obesity and diabetes than we do on the police, fire service and judicial system combined – that’s a scary statistic!

Hugh, fuelled by what his doctor had told him, decided to try and get a whole city to lose weight together. He chose Newcastle and launched Newcastle Can!

He was hoping, in an ambitious, yearlong social experiment, that he could galvanise the people of Newcastle to lose 100,000lbs.

One of the members of the public, Julie, told Hugh he was appealing to the wrong demographic in the city. She said he needed to target the poorer areas like Walker, Byker and the West End. The issue in these places is the food they have access to.

In the UK there has been a 43% increase in takeaways springing up in deprived areas over the last 20 years.

Julie too Hugh to Church Walk which was the main shopping area in Walker when she was growing up. It used to have a greengrocer, a butcher’s, a pub and a small supermarket. Now all that’s there is a budget frozen food shop, a Greggs and a convenience store. The people in the area have very little choice about what they buy to eat and very little access to fresh fruit and veg.

Want Some Chocolate with That?

High highlighted the problem of non-food shops trying to get you to impulse buy at the checkouts and spend a little more when you visit them. When we are buying clothes or makeup or stationery, we are being encouraged to buy chocolate and sweets at cut prices.

Hugh took WHSmith as an example. Not only are the checkouts nestled within huge piles of sweets and chocolates, but when you use the self checkout, an advert pops up on the screen asking if you want t purchase some chocolate at a special price.

Even Top Shop has its own brand of sweets available as you queue to make your purchase. And temptation is a very hard thing to resist!

Hugh even got vouchers for MacDonalds when he had finished his purchase at WHSmith – bonkers!

In the next episode, Hugh looked at sugar in so-called healthy drinks, how exercise can help with the battle of the bulge and how Newcastle was getting on with Newcastle Can!

There are a wide range of delicious recipes and diet plans in WLR. You can add any plan to your food diary and mix, match, swap and change as much as you like. Try it free for 24 hours.

There are a wide range of delicious recipes and diet plans in WLR. You can add any plan to your food diary and mix, match, swap and change as much as you like. Try it free for 24 hours.

Easy Meat-Free Recipes for All 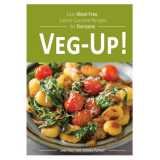 Whether you are vegetarian, vegan or just want to enjoy more meat-free meals these deliciously simple recipes will satisfy tastebuds and tummy, without going over the top on calories or time.

Save £3 in the wlr shop
Sponsored