These reviews are by WLR members who have actually used Slim Fast. Sometimes as a standalone plan, others in conjuntion with WLR.

If you would like reviews of individual meal replacements and snacks, see our Slim Fast Tried and Tasted reviews.

'Tried them many times in the past. I did not find them in any way satisfying or tasty. In fact, I would usually end up eating something else as well as they never satisfied my appetite. I think they have a place in an emergency situation (better than resorting to crisps or chocolate or heavily calorie laden pre-packed sandwiches) but on the whole I would rather prepare myself a healthy and more appetising meal.'
Tucankaz

'I did try meal replacements but actually found it harder to stick to my diet when I had them. I think it’s because I enjoy deciding what to have to eat, how to use up or keep down my calories. Some people who don’t like this aspect might find meal replacements useful but personally for a drink or a small bar it seems like too many calories and not enough food. I’d rather have a big healthy low calorie meal any day!'

Enter your details to calculate your ideal weight range, and discover how soon you could reach it!

'My friend and I used to call Slim Fast death by milkshake as we found it unsustainable for more than a week i.e. you felt starving, had awful energy highs then lows until your next shake or snack. The boredom messes up your willpower too. The Slim Fast pasta dishes are awful, taste really fake and chemically. The bars are just loaded with sugar hence the high/low energy peaks and taste sickly sweet anyway. I just felt miserable the whole time I was on Slim Fast.'
SmallN

'I lost about a stone a couple of years ago and was my skinniest ever using Slim Fast. The milkshakes seemed to do the trick but I thought the soups and pasta were absolutely vile! Also found it embarrassing; not very discreet way of dieting (out in public with meal replacement drinks). As soon as people know you are on a diet they try and talk you out of it. Eventually stopped as was costing a fortune, wasn’t eating any fresh foods at all, such a limited calorie intake, I was only eating ready meals. I didn’t feel like it was something I could do in the long term. As soon as I stopped doing it I said goodbye to 8 stone and think that such a restricted diet is probably why I still struggle with my weight today.'
FelicityP

'I have tried Slim Fast before (the shakes, soup, bars and pasta). They are all ok for a while and the plan works because you can have an ordinary meal each day. I did lose some weight and without being strict with the cals in the evening. But then I thought about it – each ‘meal’ is about 200-250kcals and I can easily manage that having ‘normal’ food such as breakfast cereal or a sandwich. In the end I decided that it wasn’t really worth the expense. I do still use the meat replacement bars as a snack because they are tasty and fill you up.'
SexyBabe

'I tried Slim Fast for about a month or so a while back when I was completing my Uni. Dissertation and didn’t lose a thing. Not only did it taste nasty, especially the powders you have to mix yourself but despite following it religiously and working as an active temp as well it didn’t work so I gave it up.'
Villingworth

'I tried the Slim Fast shakes for breakfast and lunch and then a healthy dinner. Basically it was fine for a few weeks but after that I began to get bored and hungry in between. Also they hardly take any time to drink so it isn’t like sitting down and taking your time over a nice fulfilling healthy breakfast. I think as a kick-start to a diet they are a good idea but it is impossible in my opinion to stick to them permanently. Also they are a very expensive way of losing weight as you need so many. I found eating sensibly and regularly much more successful and more importantly enjoyable.'
Helen19

'Have never gone the whole hog and done the Slim Fast thing as I didn’t think it was a healthy way to lose weight. However I have had a few of the boxed Slim Fast proper meals e.g. Chicken Korma and I have to say they are blooming lovely. I usually try and cook some extra veg to go with it though.'
Staffitaxi

'I tried those Slim Fast meal replacements. I did lose weight but it was only because they made me throw up. I found the bars really gritty. I suffered for a week lost 8lbs but put that and more on when I couldn’t stand it any longer.'
AndieH1

'I tried Slim Fast for a while. It didn’t work for me because although it initially filled me up, after about an hour I was starving again. Also I suffer from IBS and it triggered that too. So it wasn’t a success for me. I also believe that one of the biggest problems with meal replacements is that it doesn’t improve your eating habits because as soon as you stop with the replacements then you go back to bad habits and the weight piles back on.'
Dizzy

'While meal replacements can a useful tool under medical supervision for people morbidly obese they do nothing to educate us to eat normally. Major risk is putting weight back on when stopping. Surely very anti what they want. I did try Cambridge Diet for several bouts of 1-2 months in the past; made life miserable.'
Ritsonmk

Slim Fast can help you lose weight, though may be difficult to stick to if you have more than a few pounds to lose.

The main benefit of using Slim Fast is that it provides structure and convenience. So you don't have to make decisions about what you're going to eat - you can literally just grab the next pack.

The problem with this is, used alone, the Slim Fast plan doesn't really help you to get a grip on normal, everyday eating. So the chances of regaining lost weight once you come off the plan are high.

A good idea could be to use it as a kickstart to your weight loss, gradually moving towards a healthy diet with a wider range of foods. The WLR food diary can help you do this, you'll find all the Slim Fast products on our database.

Slim Fast meal replacement products are fortified with all the right nutrients, but evidence suggests that these nutrients are better utilised when they come from real foods. We'd always recommend getting some extra fruit and veg in with your Slim Fast plan.

Another good reason for varying what you eat is to prevent boredom. If you start to crave different tastes, you feel deprived on a very restrictive diet. This can be counter-productive as feelings of deprivation can easily send many of us off track!

If you'd like to devise your own diet plan (or use one of ours) why not take a 24hr free trial ...

If you'd like to devise your own diet plan (or use one of ours) why not take a 24hr free trial ...

Who said diets have to be bland and boring? 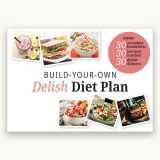 This little book proves they don't.

Inside are 30 scrummy breakfasts, 30 luscious lunches and 30 delish dinners... So go ahead, start building your own delish diet plan today!