Atrial Fibrillation (AF) is the most common form of arrythmia – a condition in which the heart does not beat to a normal regular rhythm. According to the NHS, arrhythmia affects more than 2 million people a year in the UK.

The study, being presented at the American College of Cardiology’s 68th scientific session, analysed the health records of 14,000 people over a period of 22 years and is the largest to assess the relationship between AF and carbohydrate intake.

Participants reported their daily intake of 66 different foods in a questionnaire. Researchers then estimated the daily carbohydrate intake and the proportion of calories from carbohydrate for each participant. On average, carbohydrates were about half of calories consumed.

Participants were divided into 3 groups by carbohydrate intake:

(Note: Most low carb diets for weight loss recommend a maximum of 20-50g of carbs a day, which would represent in the region of 6% to 10% of daily calories.)

Of the nearly 14,000 people who did not have AF when they enrolled in the study, nearly 1,900 were subsequently diagnosed with AF, with those in the Low Carbohydrate group the most likely to develop the condition.

The Low Carb group were:

Lead author of the study, Xiaodong Zhuang, MD, PhD said there were several potential mechanisms that could explain why restricting carbohydrates could lead to AF:

"The long-term effect of carbohydrate restriction is still controversial, especially with regard to its influence on cardiovascular disease," said Zhuang "Considering the potential influence on arrhythmia, our study suggests this popular weight control method should be recommended cautiously."

While the research shows an association, it does not prove cause and effect.

The study did not track participants with asymptomatic AF or those who had AF but were never admitted to a hospital, nor did it investigate different subtypes of AF, so it is unknown whether patients were more likely to have occasional episodes of arrhythmia or persistent AF.

The study did not account for any changes in diet that participants may have experienced after completing the questionnaire.

Low carb may be a reasonable option for some people, especially those who are unable to stick to other types of diet that rely on restricting calories in some way, but there are a lot of doubts about its effect on health over the long term.

It’s actually not possible to follow both a low carb diet and UK healthy eating guidelines at the same time.

Whilst initial weight loss on low carb diets can be quite dramatic, studies have shown that total weight loss after six months is pretty much on par. So why compromise your health? 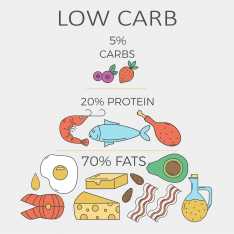 Those following low carb/ketogenic diets must forego many fruits and vegetables, and almost all whole grains and legumes. Good intakes of all these foods are associated with good health.

There seems to be either some confusion, or deliberate muddying of the water by ardent ‘keto’ enthusiasts, which equates ‘carbohydrate’ with sugar and highly processed foods. Some proponents even go as far as to suggest that our health professionals are purposefully trying to make us ill.

UK healthy eating guidelines specifically say that these types of foods should be eaten infrequently. They also make it quite clear what is meant by ‘starchy carbohydrates’: potatoes, bread, rice, pasta and cereals, with the emphasis on wholegrain.

What's Best for You?

Using the food diary and food database in Weight Loss Resources will help you to decide which is the best dieting method for you. Most people find it a real "eye opener" - you can try it free for 24 hours.

What's Best for You?

Using the food diary and food database in Weight Loss Resources will help you to decide which is the best dieting method for you. Most people find it a real "eye opener" - you can try it free for 24 hours.