One single high-fat meal causes dramatic, unhealthy changes to red blood cells, according to a new study by scientists at the Medical College of Georgia.

What are red blood cells?

This study is the first to look at red blood cells specifically. These are the most abundant cells circulating in our blood – we have 25 trillion of them!

Their main job is to carry oxygen around the body and they are incredibly flexible. This means they flow through the vessels pretty much unnoticed, travelling all round our bodies, making sure vital organs get the oxygen they need.

Healthy blood cells are smooth and round and negatively charged. This means it keeps them away from other cells and ensures they travel more toward the outer edge of the blood vessels.

They last 120 days, becoming less effective as they get older and use up their energy.

The study involved 10, physically active men in good health. The researchers couldn’t include women in this study because oestrogen is considered protective of the cardiovascular system in non-obese, premenopausal women. 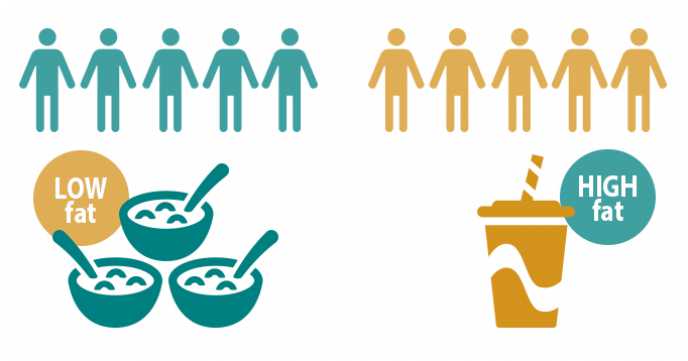 5 of the participants ate a meal of cereal that had around 1000 calories but had very little fat – 3 big bowls of sugar coated flakes and no fat milk.

The other 5 were given milkshakes made with full fat milk, heavy whipping cream and ice cream. The milkshake had the same amount of calories but was very high-fat – about 80 grams.

Four hours after the two groups had eaten their meals, their blood was tested.

In the group that had the high-fat milkshake, the normally round, red blood cells had transformed into smaller, spiky cells with a positive charge, wreaking havoc in the blood vessels.

There was evidence of myeloperoxidase (MPO) an enzyme that, at high levels in the blood, has been linked to stiff blood vessels, oxidative stress1 and heart attacks.

‘Myeloperoxidase levels in the blood are directly implicated in heart attack. This is a really powerful finding.’

When flow cytometry2 was used to examine the red blood cells, there was a substantial increase in reactive oxygen, a by-product that is destructive at high levels. One result of these high levels can be permanently changing the function of the proteins that help the red blood cells maintain their negative charge.

MPO also affects the physical structure of the usually plump cell so they can’t flex. 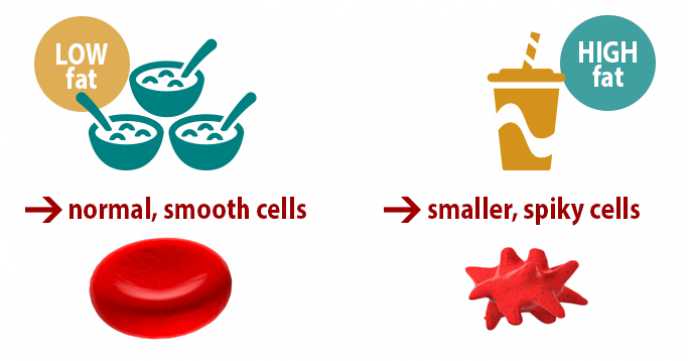 ‘Your red blood cells are normally nice and smooth and beautiful. After the high-fat meal they get these spikes on them. Much like huge ice chunks in a river, these changes affect how the blood flows.’

Added to this were changes in the white blood cells, monocytes. They got fat and foamy. In this state they promote inflammation and encourage plaque that can lead to blockages and further blood flow restriction.

These cells normally travel through the blood vessels like the bin men of the circulatory system, looking for old and disabled red blood cells that need getting rid of. The issue is that the new, spiky blood cells are indentified as not quite right and the bin men start trying to get rid of some of them.

The plasma, the fluid portion of the blood, was also affected. Instead of being a clear, yellowish colour when separated, it was thick and off-colour and filled with lipids. 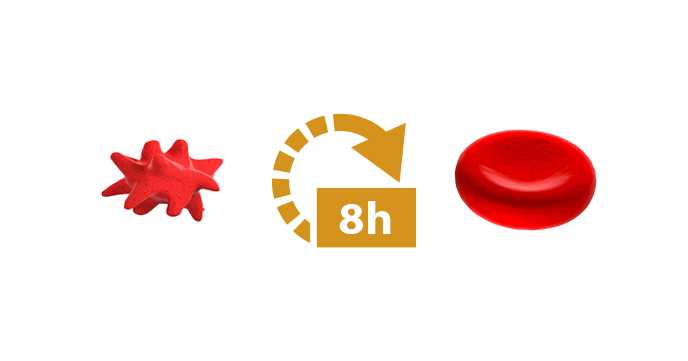 It’s not all doom and gloom though. These dramatic, unhealthy changes resolved after about 8 hours as long as the high-fat feasting hadn’t continued.

So, as long as it is a one off meal, the blood cells return to normal. The issue is much more serious when high-fat food makes up the majority of your diet.

This study was quite small but had dramatic results. The problem is that more studies to measure the long-term impact on our bodies would be difficult because the researchers would have to risk the health of the participants to get answers.

What it does show is that a constant, high-fat diet is incredibly bad for you. Not just for your weight but internally too.

While this isn’t new news, it reiterates that a healthy diet and exercise will help keep you healthier for longer.

1 Essentially, an imbalance between the production of free radicals and the ability of the body to counteract or detoxify their harmful effects.

2 A technology used to analyse the physical and chemical characteristics of particles in a fluid as it passes through at least one laser.

It's easy to follow a heart healthy diet with WLR. You can keep an online food diary to monitor your fat, fibre, fruit & veg and calories. Try it free for 24 hours.

It's easy to follow a heart healthy diet with WLR. You can keep an online food diary to monitor your fat, fibre, fruit & veg and calories. Try it free for 24 hours.